The navigator design consists of multiple windows, desktop components, each of which displays certain navigator elements.

Each window must have a caption which will be used when displaying the window in the user interface.

For each navigator element, you can specify the window in which its descendants should be displayed. If necessary, the element itself can be displayed there. Thus, the set of subtrees (navigator elements) that is displayed in each window is uniquely determined. Graphically, this can be represented as follows: 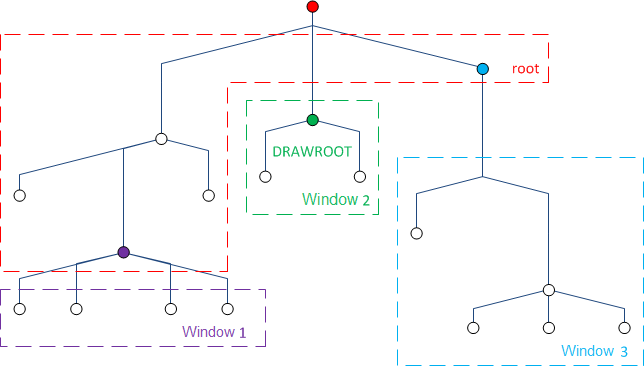 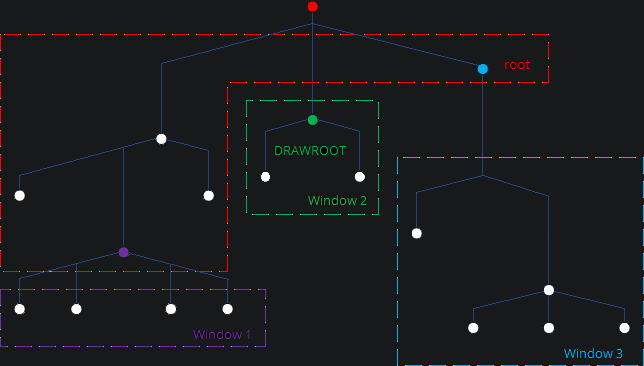 Window layout on the desktop​

Each window occupies a predefined section of the desktop. Graphically, this can be represented as follows:

The entire desktop is 100 x 100 pixels in size. When creating a window, you must specify the window's upper left coordinate, width and height, expressed in pixels. It is desirable that windows should "cover" the entire area of the desktop. If this does not happen, then the free area will be given to one of the windows (there is no guarantee as to which one). Two windows are allowed to have absolutely identical coordinates and sizes. In this case they will be displayed in the same place, but switching between them will be possible using tabs.

At any moment in time in each window there can be one current user-selected navigator folder. Accordingly, if the element item belongs to a window other than the window of its parent folder, then this element is shown in its window if and only if its parent folder is selected in its window. The predefined System.root folder is always considered to be selected. If at some point a window does not display any navigator element, then that window is automatically hidden.

There are several window types that determine which component in the interface will be used to display navigator elements.

By default, a UI component that displays navigator elements is wrapped into scrollbars. They appear when the component does not fit in the window. If necessary, this behavior can be disabled.

There are several predefined system windows that are necessary for the client application to work:

By default, the desktop has the following layout (the left coordinate, upper coordinate, width, and height are indicated in brackets):

To manage windows, use the WINDOW statement.