The form design defines how a form is displayed in the interactive view.

As with any GUI, form design is a hierarchy whose nodes are components. Components, in turn, can be:

Each component must have its own unique name within the form.

All children of any container make an ordered list. It is necessary to determine how the child components of each container on the form should be placed. To do this, one of the following types can be specified for a container:

In future versions, the last three types of containers (SPLITV, SPLITH, SCROLL) will be deprecated and replaced with the corresponding split and scroll options in vertical and horizontal containers.

If at some point a container has no child components , or they are invisible, it is automatically hidden. In turn, if a component is not a child of any container, then it will not be shown on the form.

When defining the form design, the developer can use the following base components, which are created automatically based on the form structure:

The developer can control how the platform distributes the available container sizes between its internal components, as well as how these components will be located relative to each other.

First of all, for each component you can specify the base size that this component will receive in any case, regardless of the algorithm for placing its container.

To determine the final size of the components and their location inside the container, the following algorithm is used:

For example, in the case of a vertical upper container, if the component is set to align at the start then it will be located on the maximum left of the container; if it is set to Stretch, the component will occupy all the space from the left to the right border.

This component layout algorithm is a special case of CSS Flexible Box Layout (and is implemented using it in the web client). For example, the CSS flex-grow property corresponds to the extension coefficient, and flex-basis corresponds to the base size.

The column container breaks its static (horizontal) direction into N identical parts (where N is the number of columns): each part then has its own components, as if this part were a separate vertical container.

For base components, you can specify the automatic size option (autoSize): in this case, the base size will change automatically in to enclose exactly the entire contents of this base component (for example, for a table: all its records plus a title).

Since the current implementation uses the CSS Table Layout Fixed mechanism to place columns inside the table in the Web client, and its capabilities are significantly limited, the extension coefficient for properties displayed in the table can be equal either to 0 or to the base size.

The caption and the value cell are placed inside the property panel in the same way as if the panel were a container (horizontal if the caption is on the left, vertical if at the top), in which the cell has an extension coefficient of 1, the caption is 0 and the alignment of both is set to STRETCH

When displaying properties, you can explicitly specify dimensions of the entire container (together with the caption, if the property is in a panel) and also the dimensions of the value cell itself. To do this, add the prefix value to the size name, e.g. valueWidth). Also, it is worth noting that these dimensions (those of the value cells, and not the entire container) are also used to determine the column widths if the property is displayed in a table.

For property value cells, it is also possible to specify the base width not in pixels, but using a sample value (widthValue) In this case, the platform takes into account the user's font/mask/locale to calculate and set the width in pixels so that the user can see exactly the specified sample value (no more, no less). It is assumed that the sample value must be either a string or of a class equal to the class of the property value.

In addition, cell widths can be specified in characters (charWidth), which is equivalent to giving a string sample value consisting of the given number of zeros.

By default, the extension coefficient and alignment for components are determined as follows:

The base width of tables/trees is 130 pixels by default, and the height is 70 pixels. The base size of the property panel is determined in the same way as if the panel was a container (horizontal if the caption is on the left, vertical if it is at the top) consisting of the caption and the value cell. The base size of the remaining base components (as well as the caption in the property panel) is determined in such a way as to enclose all the text contained in them.

The following formulas are used by default to determine the width of a property value cell:

The default height of a property value cell is equal to the height of the font used, except properties whose values belong to the TEXT class (in this case, the height is four times the font height).

If the form opens in window mode it does not have an upper container, so you need to determine this window's initial size. This size is determined similarly to the default base size, the only difference is that for tables/trees the default size is determined not as a constant (the default is 130, 70) but in such a way that it contains their whole contents (similar to the automatic sizing mechanism), but no less than 130 in width and 140 in height.

The automatic design is generated as follows:

The hierarchy of containers and components in the default design will look like this:

To set up the design of the form, use the DESIGN statement.

The output is the following form: 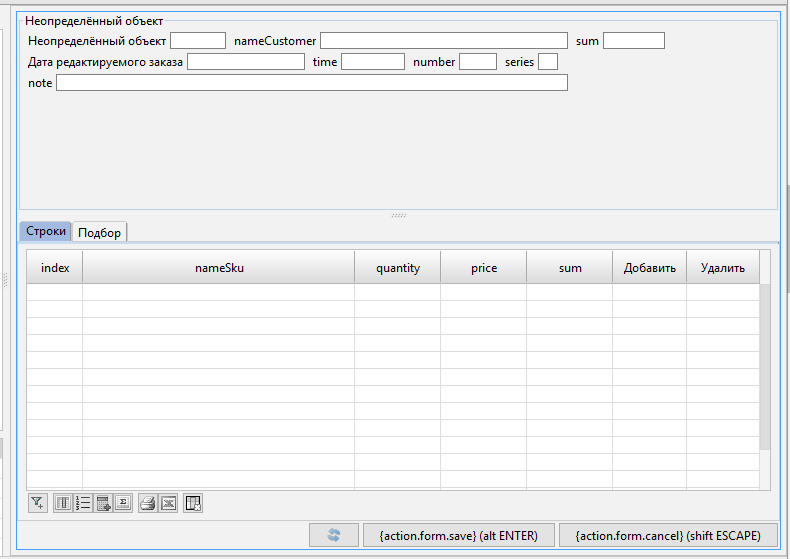